The iPad started shipping in April, and since then it has basically had the tablet market to itself. Literally, in the six months after the iPad’s release, it didn’t have a single direct competitor. Dell launched the Streak shortly after the iPad, but the Streak was a 5” unit that was significantly smaller than the iPad. In the 7-11” tablet market, Apple has been the only real player. 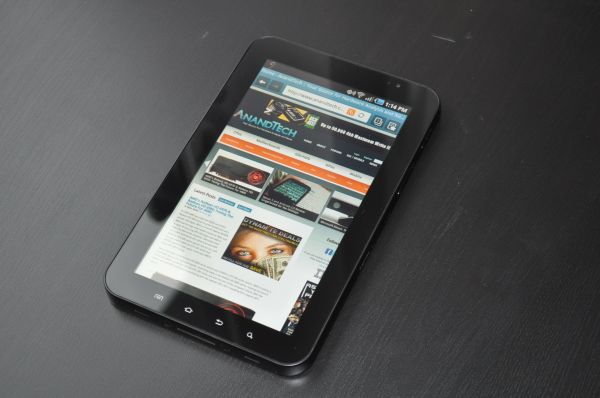 But that all changed when Samsung launched its 7” Galaxy Tab last month. It’s available for $599 off contract on all four major American carriers and US Cellular ($399 on a two year contract with Sprint or US Cellular, $349 for T-Mobile), with a $499 WiFi-only model on the way. If those pricepoints sound familiar, it’s because the unsubsidized prices are right on top of the 16GB iPad. I’m betting that’s not coincidental; it’s pretty clear what Samsung was targeting when they priced the Tab.

The Tab is the first Android slate to come from a major manufacturer, and probably will be the last one to release with Froyo. The rest (Dell’s 7” Looking Glass tablet, the Motorola tablet showed off in Google’s D: Dive Into Mobile press conference, and rumored devices from HTC, Acer, Asus, and others) appear to be releasing with Honeycomb in the early part of next year. Samsung says that the Galaxy Tab will be updated to Gingerbread at some point in the future, along with Honeycomb whenever that releases. But we’ll get to the software in a moment, let’s talk hardware first.

On paper, the Galaxy Tab is essentially a jumbo-sized implementation of the Galaxy S smartphone platform. You’re looking at the same A8-based 1 GHz Hummingbird processor and PowerVR SGX 540 graphics chip, the same 512MB RAM, the same lightweight plastic build, and pretty similar industrial design. The screen has been upsized, from the 4” WVGA unit in the Galaxy S to a 7” WSVGA panel, but it’s not a Super AMOLED display like on the smartphones. You lose a couple of megapixels and HD video recording capability on the rear-facing camera, but the Galaxy Tab does get a 1.3MP front facing camera for video calling.

The design is rather minimalistic, with the front having a small bezel around the screen and four capacitive touch buttons underneath the screen. Since we’re on the topic, I’d like to voice my annoyance that the touch buttons are always in different orders. HTC and Samsung use different layouts, Motorola uses two different layouts for no explicable reason, and Google has specced both of its Nexus phones with layouts that are not normally used by their manufacturers. The lack of standardization isn’t a huge problem, but it can get annoying if you switch between multiple Android devices on a daily basis.

The top view of the Galaxy Tab, iPad, and Vewsonic G Tablet (top-bottom)

Anyways, back to the industrial design. The sides are matte black, with the headphone jack at the top, dock connector and speakers at the bottom, mic on the left side, and the power and volume buttons and the covered microSD card slot on the right side. The back is glossy and dotted in the same way as the Fascinate and Vibrant. Unfortunately, the Galaxy Tab’s back panel is non-removable, so you can’t swap out the battery. Compared to the iPad, the overall feel is a bit less high end, mostly due to the use of glossy plastic instead of the aluminum unibody. But overall, the ID is very straightforward, leading to a clean and elegant device.

When you pick it up, the Galaxy Tab feels light, almost shockingly so. Given that it’s half the size of the iPad and just over half the weight, this first impression isn’t exactly unfounded. Given the lightness, the feeling of solidity is actually surprising if you’re expecting something along the lines of the Galaxy S phones - compared to the ultralight Fascinate/Captivate/Vibrant/Focus, the Tab feels significantly more substantial. The overall build quality definitely exceeded my expectations, though the unibody aluminum shell puts the iPad on a different level.