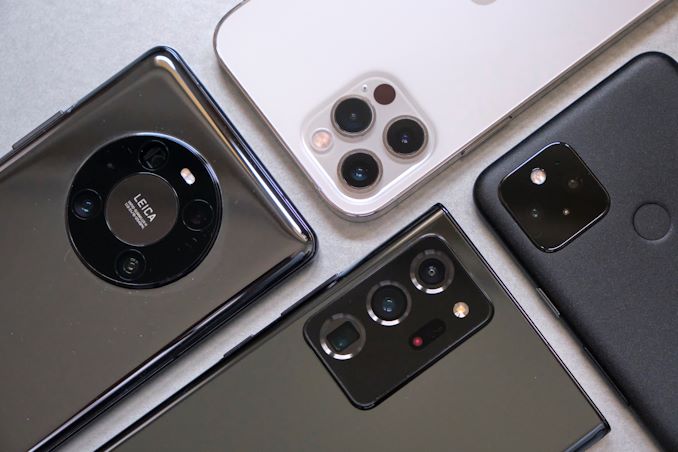 We’re a few days away from completing the 2020 calendar year, and it’s been a quite a hectic year for everybody. In times of troubles, the smartphone industry had been under a two-prong attack from both an economic stand-point as well as the from a product maturity standpoint – trying hard to innovate with new features to convince users to upgrade their previous generation devices. This year, we’ve seen several new industry trends make breakthrough advances in terms of technology in smartphones, beyond the obvious elephant in the room, by which 2020 will be remembered by: Big camera sensors, 120Hz displays, several large SoC moves, 5G, and several other vendor product choices.

Although a subjective opinion, what I view as one of the most important developments in 2020 mobile devices has been the widespread adoption of larger camera sensors. While in years past, Huawei had been the notable exception to the rule in terms of adopting larger camera sensors in their smartphones, this year, we’ve seen almost everybody make the transition to larger formats – either 1/1.78” sensors or even the new humongous 1/1.33” beasts in some flagships.

Bigger sensors most of the time means that vendors are able to use bigger pixels – which in turn results in better dynamic range capability and better low light captures. This year we’ve seen many flagships at least adopt a 1/1.78” sensor which is notably larger than previous generation 1/2.3” or 1/2.5” units – resulting in 12MP 1.8µm pitch units like on the new S20 series and some other vendors such as Sony.

Other vendors have opted to go even bigger – ranging from 1/1.3” to 1/1.4” sensors. The most notable and talked about has been Samsung’s new 108MP units in the S20 Ultra and Note20 Ultra series. Although the high-pixel count sensors deployed on these devices have questionable benefits in their native resolution, the ability to bin 3x3 pixels down to an 12MP image means we’re looking at effective light gathering capabilities similar to that of a 2.4µm pixel pitch sensor, something well beyond other current sensors on the mobile market.

We’ve seen variations of these huge sensors – Xiaomi also uses a 108MP native unit but bins down by 2x2 to a 27MP capture mode in general use-cases, while OnePlus had opted for a slightly smaller 1/1.4” sensor in the OnePlus 8 Pro with a 48MP native resolution, binning down to 12MP.

The big caveat with these big sensors is their optics systems – many times the plastic lenses can’t keep up with the resolution of the sensors, partly negating some of their characteristics, making much of the 108MP contenders relatively gimmicky in real-world scenarios.

The other big issue with larger sensor sizes is that they require a larger z-height of the camera module, which means larger camera bumps. And oh boy, we did get some really funky looking camera bumps in this year’s devices, such as the massive design element on the S20 and Note Ultras.

Another big development this year has been the mainstream adoption of high refresh rate display panels. While in 2019 90 or 120Hz displays were exotic or reserved for special gaming-oriented phones, in 2020 it could be said that it was a checkmark feature for almost every vendor, essentially eliminating 60Hz from almost all new product releases bar the mid-range or low-end. 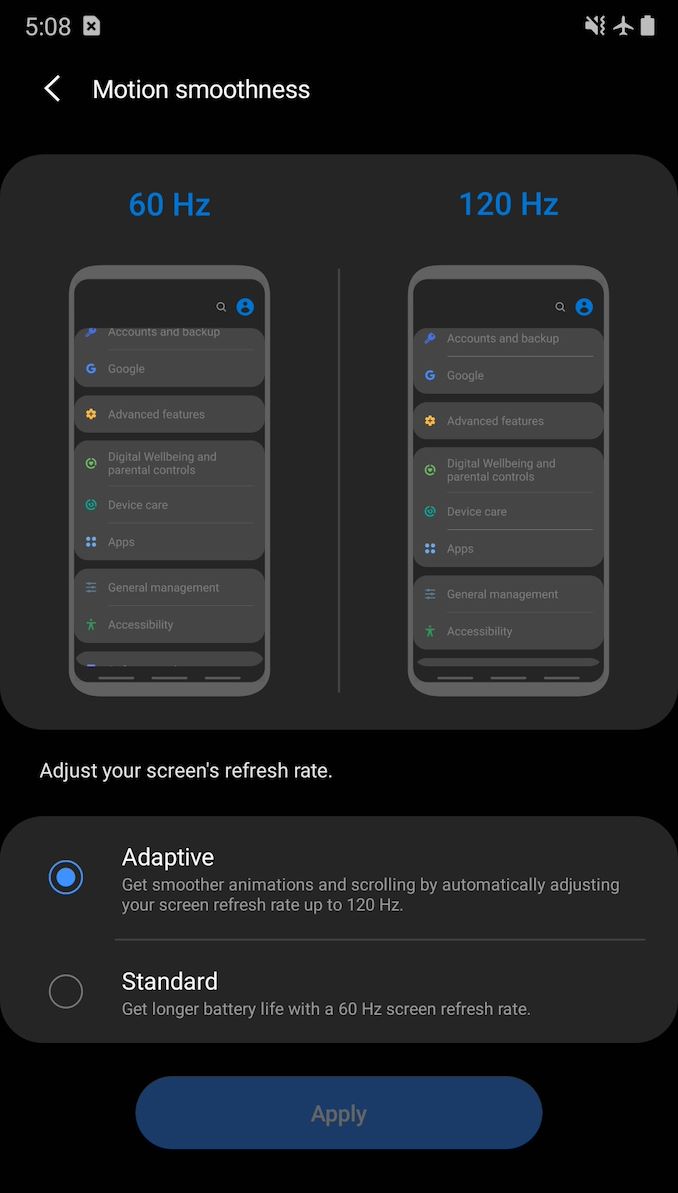 Though 120 and 90Hz displays this year certainly have augmented the fluidity and user experience of flagship devices, only the Note20 Ultra was the one device which was able to adopt this with relatively few drawbacks, thanks to its new polycrystalline and oxide panel technology. For the rest of the market, 120Hz came with a relatively larger battery impact, meaning the new fluidity came with a device longevity compromise.

For 2021, I see more vendors adopt the new 120Hz feature in a more optimised manner that improves upon the battery consumption, maturing the technology to a point where it becomes a no-brainer to have it enabled by default.

Continuing with our takes on key hardware component changes in 2020, one large move has been Samsung’s abandonment of their custom CPU cores in their Exynos chipsets. Struggling with power efficiency and performance competitiveness for several years now, Samsung LSI finally cut the cord on their custom CPU core design project and team, opting to instead fully rely on Arm’s future Cortex CPU IP for next-generation Exynos SoCs.

We had been covering Samsung’s cores in detail for several years now, and it’s unfortunate to say that the project’s cancellation is likely the best-case scenario for future Exynos SoCs, dropping one of the chip’s most negative aspects – and in turn likely result in significantly better designs in 2021, hopefully eliminating some of the performance and power efficiency differences between Snapdragon and Exynos Galaxy phones. 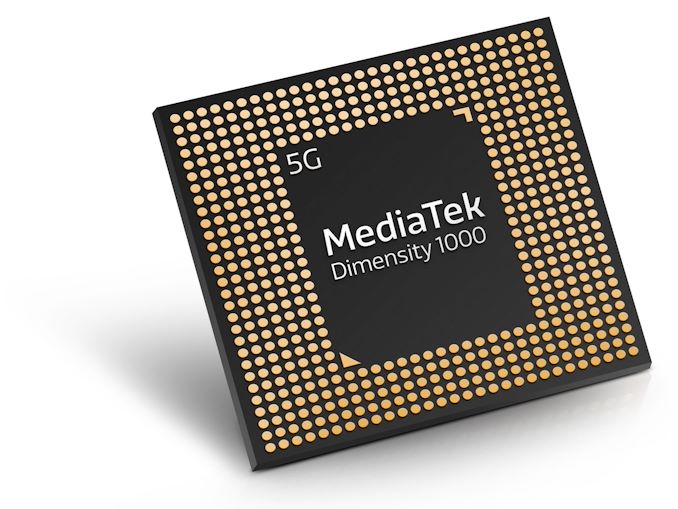 2020 marked MediaTek’s re-entry into the high-end SoC market, introducing the new Dimensity 1000 SoC. Although the new design was off to an extremely slow start with very few design wins in the first half of the year, the company’s efforts in the mid-range Dimensity series has results in a large amount of design wins, and according to Counterpoint Research, allowed the company to actually position itself as the #1 SoC vendors in Q3 2020, taking market share from the likes of Qualcomm.

We had reviewed the Dimensity 1000 inside of the OPPO Reno3 5G and found it to be an excellent SoC in terms of performance and efficiency – what’s really lacking though is a more prestigious high-volume design win that has more visibility. Hopefully MediaTek manages to achieve such a design in 2021.

While 5G has been a premium “the new thing” feature in some 2019 devices, it can be said that it’s really in 2020 where the new cellular communication standard has really been adopted as a mainstream technology in new smartphone products. Almost every new Android flagship device has had 5G as a selling point in 2020, and with Apple’s release of 5G-only iPhone 12 series, we can pretty much say we’ve made a turning point between 4G and 5G.

Although cellular networks in many countries are still in deployment and it’ll probably be a few years before 5G becomes ubiquitous for everybody, buying a 4G device today is no longer the best long-term investment unless you’re really looking at low-end devices. 5G also has trickled down to the premium and mid-range thanks to the likes of SoCs such as the Snapdragon 765 – with 2021 projected as being the year where we’ll also see the $250 device market also adopt 5G connectivity.