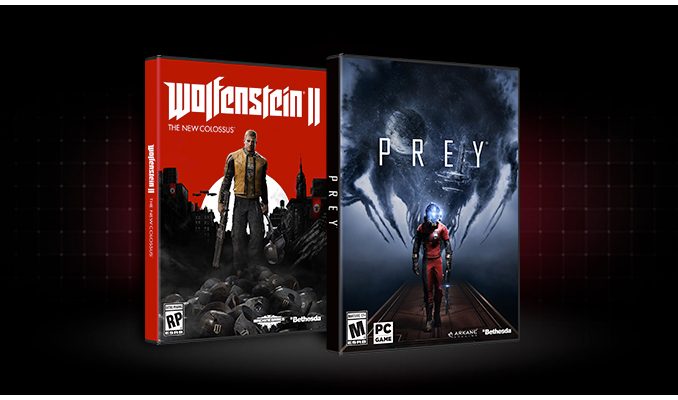 AMD has kicked off a new campaign that adds free digital copies of Prey and Wolfenstein II: The New Colossus to select Radeon RX Vega 64 and Vega 56 graphics cards. The offer will run almost worldwide till the end of the year, thus making AMD’s latest high-end graphics cards more attractive throughout the holiday shopping season.

Starting from November 24 and to December 31 (or when AMD runs out of codes), AMD will include vouchers for Prey and Wolfenstein II: The New Colossus downloads with air- and liquid-cooled Radeon RX Vega 64 as well as Radeon RX Vega 56 graphics cards from various suppliers in most of the world. Meanwhile, due to legal concerns, AMD will offer Sniper Elite 4 instead of Wolfenstein II in Austria, Germany, Switzerland, and Israel. All codes must be redeemed within two months after the end of the promo campaign, by February 28, 2018.

The launch of AMD's game bundles for the RX Vega comes at an interesting time. Due to cryptocurrency mining frenzy and due to generally high demand for advanced video cards among gamers, the Radeon RX Vega cards have been in short supply and selling for well over MSRP when they are in stock. As of this morning, Newegg is entirely sold out of RX Vega 56 cards, and RX Vega 64 cards start at $599. So AMD doesn't need to do much to spark demand for these cards at the moment.

At present, AMD only includes vouchers with reference design boards and it remains to be seen whether the company extends the campaign to custom RX Vega products from its partners, should they launch before the end of the year.

Besides bundling Prey and Wolfenstein II: The New Colossus with select Radeon RX Vega video cards, AMD is continuing to bundle Quake Champions “Champions Pack” with select graphics adapters powered by the Radeon RX550, RX 560, RX 570 and RX 580 GPUs (as well as PCs featuring the cards from participating system integrators). This campaign also ends on December 31 and all the codes must be redeemed by February 28, 2018. The Quake Champions "Champions Pack" may be obtained for free with the purchase of boxed versions of AMD’s Ryzen 5 and Ryzen 7 CPUs as well as systems on their base. Retail value of Quake Champions “Champions Pack” is $29.99.