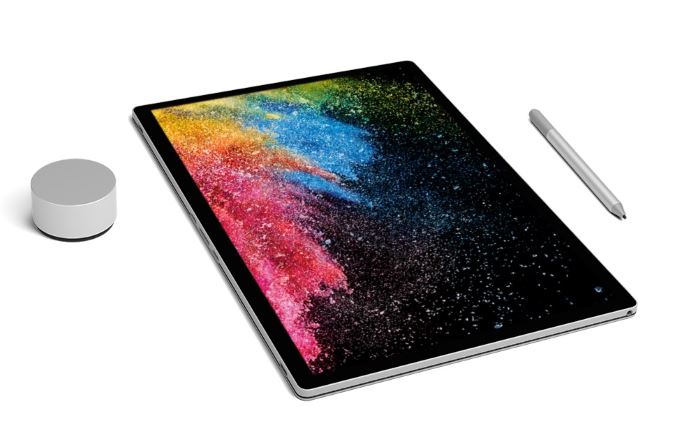 In what some would call a surprise announcement, Microsoft has unveiled the much anticipated Surface Book 2, 2 in 1 laptop. With content creators, designers, and PC gamers requiring more and more horsepower for demanding tasks, the two-year-old Surface book could be perceived as a bit long in the tooth. And while the Surface Book is a solid 2 in 1, people still wanted more out of their device. Microsoft says the Surface Book 2, “removes the barrier between the desktop and the laptop by giving mobile professionals the power of a desktop, the versatility of a tablet, and the freedom of a light and thin laptop…”

The appearance of the SB2 compared to the original looks to be identical with its silver magnesium case and the familiar Muscle Wire hinge making its way forward as well. When closed, due to the special hinge, it looks like a book closed over a pencil as there as a gap towards the hinge side which shrinks to nothing as it nears the opposite end. The keyboard also looks the same and uses LED backlit keys for ease of use in low light situations. Ports on the outside consist of two USB 3.0 (5 Gbps) Type-A, and one USB Type-C. It also has a UHS-II SDXC card reader and for audio a 3.5mm headphone jack. 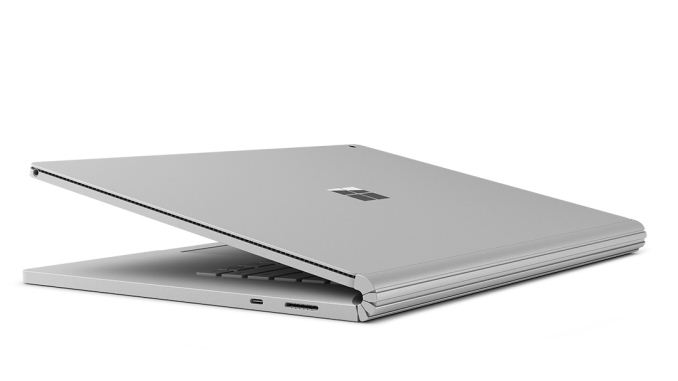 The Surface Book 2 will come in two main options; either the 13.5”, 3000 x 2000 PixelSense display (found in the original SB), or now in a 15” 3240 x 2160 Pixelsense Display. Both options are 10-point multi-touch capacitive screens and still use a 3:2 ratio instead of the more popular 16:9. The monitor supports the Surface Pen and Surface Dial on-screen support. Microsoft worked with Adobe for increase integration between the Surface Book 2 and Adobe Creative Cloud with new Surface Dial functionality in Photoshop letting users to more easily access and change your most frequent brush settings.

The latest SB2 is now powered by Intel’s 8th Generation Core processors and offer NVIDIA GTX 1050 2GB in the 13.5" model, or GTX 1060 6GB discrete graphics options in the larger 15" version. The graphics upgrades are a significant update from the original which shipped with a GT 940MX, but the new models appear to follow the thermal design of Performance Base version of the Surface Book which shipped with a GTX 965M as a mid-cycle upgrade. If a discrete video card isn’t necessary, the CPUs had Intel HD/UHD Graphics 620 integrated GPUs. With the use of more powerful discrete GPUs, 1080p PC gaming at 60 FPS is possible according to Microsoft. With this, the SB2 is ready for Windows Mixed Reality applications using a compatible headset and controller. 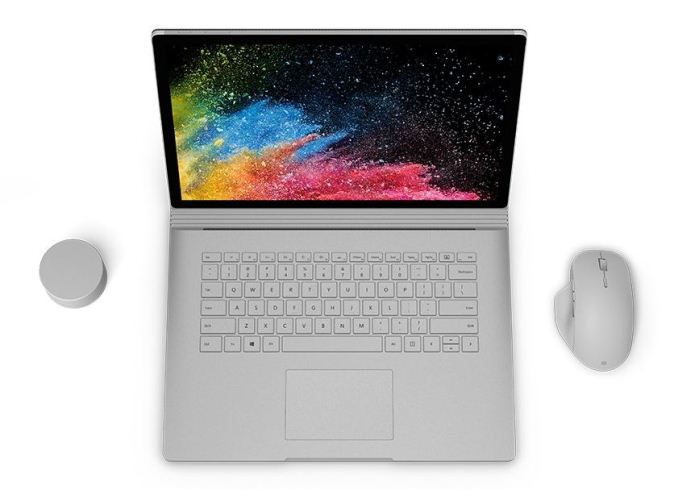 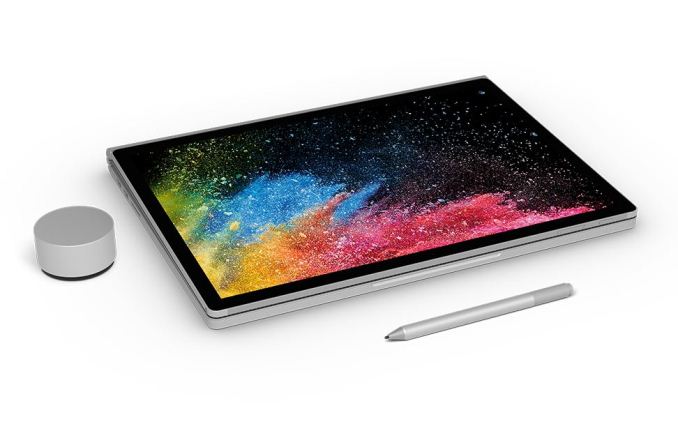 On the multimedia side of things, there is a 5MP front-facing camera with 1080p HD video and an 8MP rear-facing autofocus camera with 1080p Full HD video. The front-facing camera has IR capabilities since the SB2 works with Microsoft Hello. Audio input put is handled by dual stereo microphones while there are two front-facing speakers with Dolby Audio Premium. Wireless connectivity is integrated and supports 802.11a/b/g/n/ac as well as Bluetooth 4.1 LE. The 15" model has Xbox Wi-Fi Direct built in for gaming with compatible controllers as well.