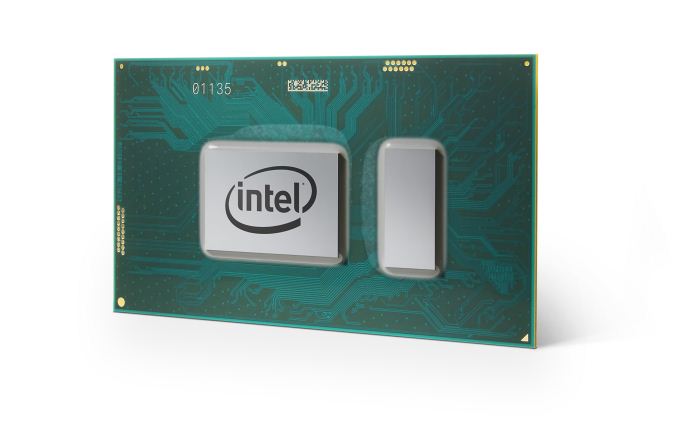 This year has been enjoyably eventful for processor releases. Intel launched their 7th Generation processors, Kaby Lake, in January. Then we had AMD release their new high-performance microarchitecture in Ryzen, EPYC and Threadripper. Intel then launched their Skylake-SP Xeon Scalable Platform, based on an upgraded 6th Generation core design, and we’re expecting new AMD APUs for mobile later this year.

And adding to that list this morning is once again is Intel. Today the company is launching its new 8th Generation family of processors, starting with four CPUs for the 15W mobile family. The launch of these processors was perhaps spoiled by Intel jumping the gun a few days ago and listing the processors on its own public price list, but also we have started to see laptop and mobile designs being listed at various retailers before the official announcement.

There are two elements that make the launch of these 8th Gen processors different. First is that the 8th Gen is at a high enough level, running basically the same microarchitecture as the 7th Gen – more on this below. But the key element is that, at the same price and power where a user would get a dual core i5-U or i7-U in their laptop, Intel will now be bumping those product lines up to quad-cores with hyperthreading. This gives a 100% gain in cores and 100% gain in threads. 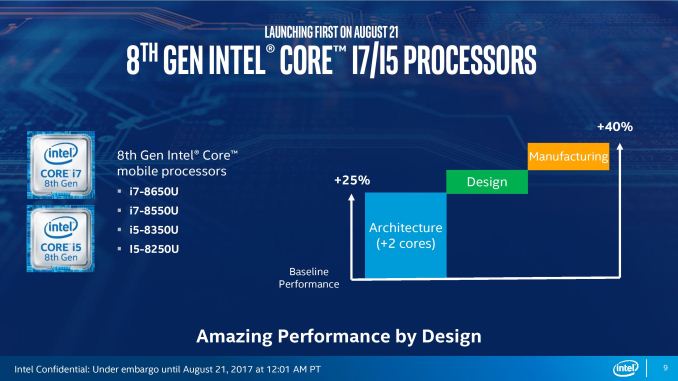 Obviously nothing is for free, so despite Intel stating that they’ve made minor tweaks to the microarchitecture and manufacturing to get better performing silicon, the base frequencies are down slightly. Turbo modes are still high, ensuring a similar user experience in most computing tasks. Memory support is similar – DDR4 and LPDDR3 are supported, but not LPDDR4 – although DDR4 moves up to DDR4-2400 from DDR4-2133.

Another change from 7th Gen to 8th Gen will be in the graphics. Intel is upgrading the nomenclature of the integrated graphics from HD 620 to UHD 620, indicating that the silicon is suited for 4K playback and processing. During our pre-briefing it was categorically stated several times that there was no change between the two, however we have since confirmed that the new chips will come with HDCP 2.2 support as standard for DP1.2a, removing the need for an external LSPCON for this feature. Other than this display controller change however, it appears that these new UHD iGPUs are architecturally the same as their HD predecessors.

Fundamentally these are what Intel calls a ‘4+2’ silicon design, featuring four cores and GT2 integrated graphics, whereas the last generation used 2+2 designs. The 4+2 design was also used in the mainstream desktop processors, suggesting that Intel is using those dies now for their 15W products rather than their 45W+ products. That being said, Intel is likely to have created new masks and revisions for this silicon to account for the lower power window as well as implementing HDCP 2.2 support and other minor fixes. 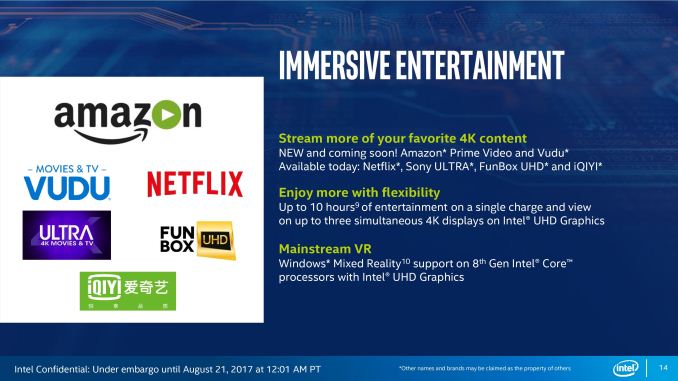 Now by having quad-core parts in the 15W form factor, performance on the new chips is expected to excel beyond what has been available from the previous generation of Core i5-U and Core i7-U processors. However Intel and its OEMs have a tight balancing act to walk here, as 15W is not a lot of thermal headroom for a two core CPU, let alone a four core one. At the same time we have started to see the 15W U-series parts find their way into smaller and even fanless notebook designs, which are more prone to throttling under sustained workloads, and quad core CPUs in this segment could exacerbate the issue. However, for the larger 13-15-inch designs with active cooling, moving down from a 35W-45W quad core processor down to 15W will likely offer substantially better battery life during intense loading, should OEMs swap out H-series chips for the new U-series chips in their designs. 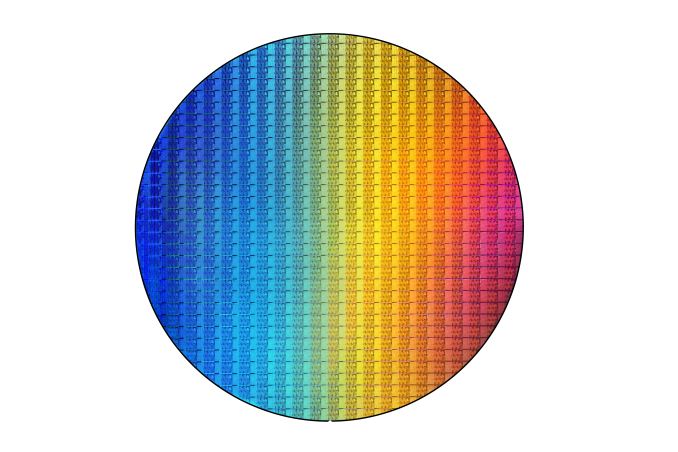 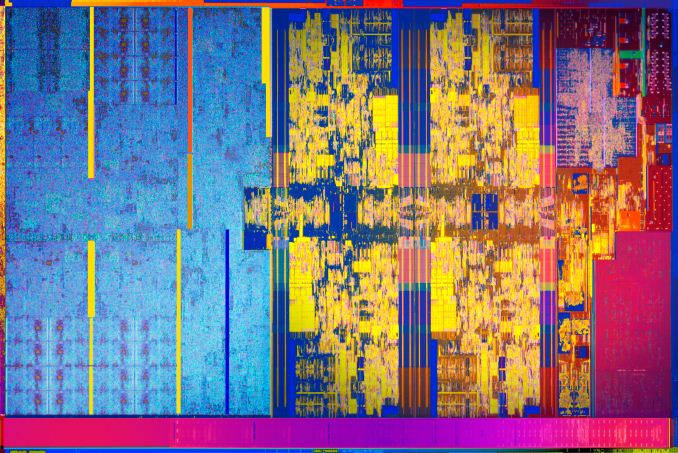 Intel provided this shot of a wafer containing these new refresh dies, which by my math gives 22 x 32.7 dies per wafer. Giving some margin for die spacing, this correlates to a 13.6 x 9.1 mm die, at 124 mm2 and 478 full dies per wafer. At a tray cost of $409 per Core i7, and running at ~124mm2 per die, that makes an interesting metric of $3.30 per square millimeter. Intel no longer officially provides die sizes or transistor counts, though a list of $/mm2 would be interesting to compile - for reference some of the high-end Xeons push north of $19/mm2.

So despite Intel launching its 7th Generation family in January, today Intel is formally launching the 8th Generation only eight months later. To explain why Intel is breaking the usual 12-18 month cadence for the generation product, it comes down to product positioning.

In the past we are used to a new numbered generation to come with a new core microarchitecture design. But this time Intel is improving a core design, calling it a refresh, and only releasing a few processors for the mobile family. We expect that Intel’s 8th Generation will eventually contain three core designs of product on three different process design nodes: the launch today is Kaby Lake Refresh on 14+, and in the future we will see Coffee Lake on 14++ become part of the 8th Gen, as well as Cannon Lake on 10nm.

Now the Generation name is no longer in direct correlation with underlying core microarchitecture or lithography process. This is going to confuse some users and anger others, although Intel’s official line is along the lines of the fact that lithography process nodes are harder to optimize, smaller nodes benefit in yield from smaller cores and as such their product portfolio has to expand beyond traditional naming in order to provide the appropriate product and the appropriate price point.

In our pre-briefings, Intel only mentioned Coffee Lake in the context of the fact that today’s launch is not Coffee Lake. Because media were expecting this to be Coffee Lake (and expecting it to be a desktop processor launch), the question ‘is this Coffee Lake’ was actually asked several times, and the answer had to be repeated. These four new CPUs are still Kaby Lake CPUs built on the same 14+ technology, with minor updates, and bringing quad cores to 15W. 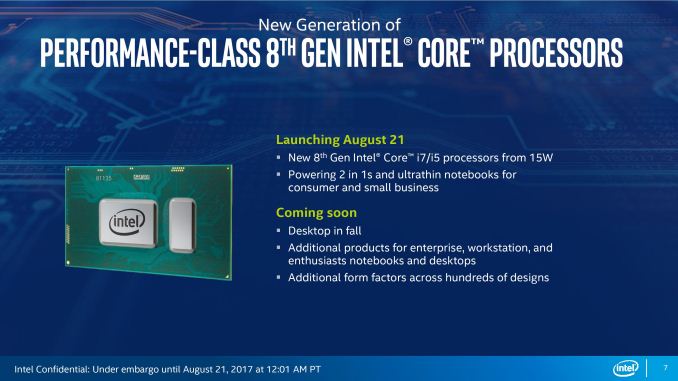 So when is Coffee Lake on 14++ (or Cannon Lake) coming? Intel only stated that other members of the 8th Generation family (which contains Kaby Lake Refresh, Coffee Lake and Cannon Lake) are coming later this year. Desktop will come in the autumn, and additional products for enterprise, workstation and enthusiast notebooks will also happen. As for today's 8th Generation U-series announcement, Intel tells us that we should start seeing laptops using the new CPUs hit the market in September.

Update: Along with the product specs for the new mobile SKUs, Intel has also uploaded the new box art for the desktop 8th Gen Core parts to their website. The boxes confirm, among other things, that once these desktop parts will launch they'll have 6 cores (with HT for the i7) and require 300 series motherboards. 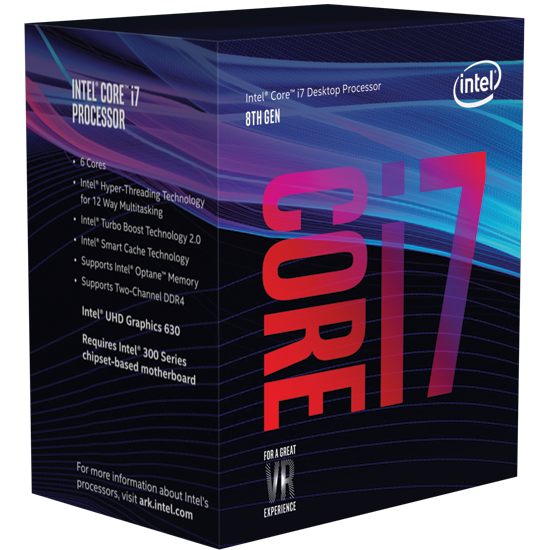 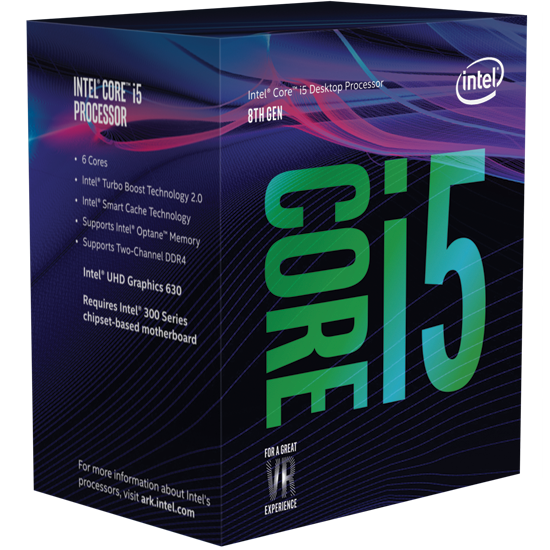